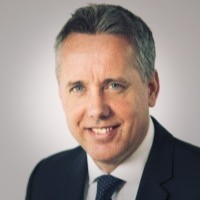 Donnacha Loughrey is Chief Executive Officer of Principal Asset Management in Ireland, having joined the Company in September 2022. He has over 30 years global investment management experience. Prior to joining the Company, Donnacha established an independent 3rd Party AIFM and UCITS Management Company, Crossroads Capital Management Limited in Ireland, and successfully scaled up the business from inception until it was wholly acquired in late 2022. Prior to setting up CCM, Donnacha was Head of Alternative Investments & Third Party Funds at KBC Fund Management Limited and a founding member of the alternative investments business since 2003. Previously he worked at Goldman Sachs International as a Global Strategist and began his career as an analyst within the Global Asset Allocation team at Merrill Lynch Asset Management in London.

His professional qualifications include Chartered Alternative Investment Analyst Association (CAIA) and he has been an Associate member of the Chartered Financial Analyst Institute (CFA), formerly as an Associate member of the Institute of Investment Management and Research (IIMR) since 1994. He received his Bachelor Business Studies (BBS) from Trinity College Dublin in 1991, and holds a MSc in Investment & Treasury (Hons.) from Dublin City University Business School since 1994.

Donnacha has held a number of Pre-Approval Controlled Functions (PCF) under the Central Bank’s Fitness & Probity regime including Non- Executive Directorships for a number of Fund Boards.